The Best Western Royal hotel has long been one of St Helier’s principal hotels. Its town centre location and impressive physical structure have helped it to remain one of the most successful hotels in Jersey.

The precise date of the founding of this hotel is not known but it was probably in 1842. The Royal is one of the longest established hotels on the Island of Jersey. Its first owner was Mr. Elias Bree, who had previously kept a hotel in La rue de Derriere (King Street).

During the course of its existence it has had various names: 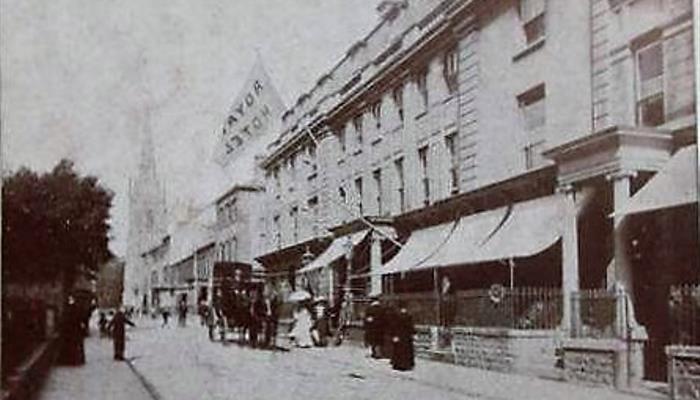 Older references to a Royal Hotel do exist. In a Guide described as a “Summer Stroll through the Island of Jersey” (2nd edition) 1811, there is mention of a Royal Hotel in Jersey, but no clue is given as to where it is situated.

A brochure compiled by the proprietor of the hotel about the year 1894 commences:

“The Hotel is situated in the healthiest part of St. Helier and is replete with every comfort.”

“Its Public Rooms, which cover an area of 6,000 square feet, are unsurpassed by any Hotel in the Channel Islands and comprise of spacious Entrance Hall and Lounge, noble Dining Room, Drawing, Reading, Smoking, Billiard and Commercial Rooms.”

“There is a dark room for photographers”.

A whole page in this brochure is devoted to “Places of Interest” which, seventy years ago included The Manor House of Samares, Mont Orgueil (Castle), St. Catherine’s Bay, The Princes Tower (demolished in 1923), the grounds of La Chaire at Rozel, St. Ouen’s Manor, The Pinnacle Rock and Plemont Caves.

The brochure contains only two comments by visitors, one of which is reproduced:

Mr. C.H. Wood writes in ‘Argosy’ “We at once decided upon the Bree’s Royal Hotel, and in no way regretted the choice, for it was well placed, quiet and comfortable and moderate in its charges ….”

The management has found, contained within a Press Cuttings Book, menu cards of Dinners dating from the last century that have been held at the Royal. Some of these menu cards are in respect of notable local events.

This menu book contains much information that could be of use to local historians regarding the social, political and commercial matters of the Island’s economy.

The exterior frontage of the hotel has been restored in keeping with its form when it was Bree’s Royal Hotel. This frontage is of architectural merit and has been designated as such by the local planning department of the States of Jersey. This ensures that the building is protected for future generations.

Today, Morvan Hotels, a long established local hotel company, has taken ownership of the hotel, having purchased the property in 2005. Recently, extensive modernisation and refurbishment of the interior has taken place in order that comfort levels meet the demands of modern times.

Now again a firm favourite with holidaymakers and business travellers alike, the Best Western Royal Hotel proudly offers the more discerning guest a traditional yet comfortable atmosphere that we believe is difficult to find anywhere else in the Channel Islands.